Just an accusation of statutory rape is enough for society to ostracize and vilify the accused, even if the case is dismissed or the defendant is adjudged not guilty. A conviction for statutory rape can leave the life of the accused in tatters, resulting in incarceration, fines, probation requirements, and other negative consequences. If you have been accused, indicted, or arrested for statutory rape, you need to seek out legal help from a Riverside statutory rape defense attorney immediately.

Statutory rape laws were initially put on the books in California and elsewhere to protect the most vulnerable in our society—children—from being sexually exploited. Children are too immature to consent to have sex with adults, and these laws penalize adults who knowingly take advantage of the innocence and naivete of kids and teens. However, these same laws that protect children are oftentimes used to demonize defendants who are innocent of the charges against them. 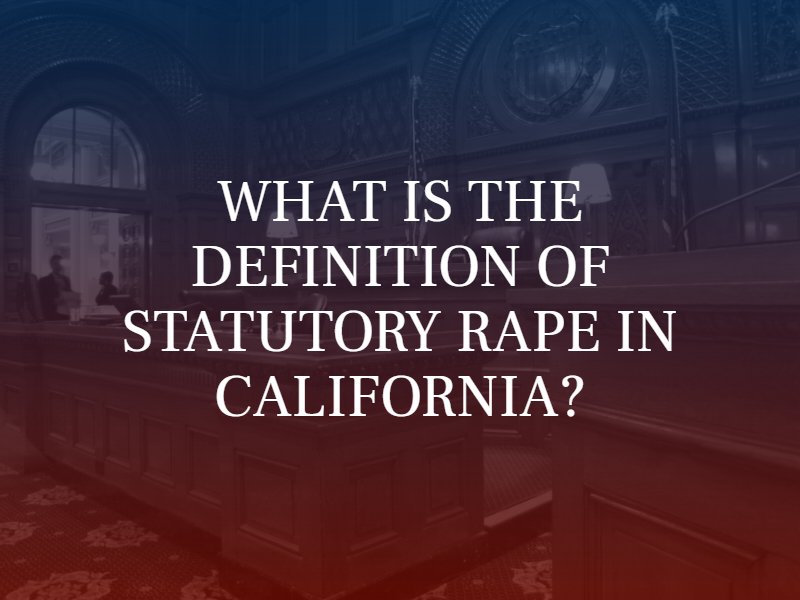 Each state has a slightly different language that is used to describe statutory rape, but the act is basically the same, no matter where you live. In California, statutory rape refers to the nonforcible sexual penetration of a person who is not old enough to consent—which is 18 years of age or older in California. However, when the victim in question is younger than 14 years of age, then the crime is generally classified as a sexual assault instead of statutory rape.

Statutory rape can be a felony or a misdemeanor in the state of California, depending on the age of the parties involved in the sex act. More specifically, the difference in the ages of the participants is what determines if statutory rape occurred and if the offense meets the criteria for a felony or misdemeanor charge. Defendants who are age 21 or older face stiffer penalties.

To be found guilty of statutory rape beyond a reasonable doubt, several elements must be found to be true. First, the accused must have had sexual intercourse with the victim. The victim and the defendant must not have been married at the time that the intercourse took place. The victim must be under age 18 when the parties had sex.

The line between consensual sex and statutory rape is sometimes blurry, but it is legally defined by the state of California. Some examples:

The only clear exception to the statutory rape laws in the state of California – the marital exception. Partners who are legally married, despite a difference in age, can legally have sex. With one parent’s consent, minors are legally permitted to marry whoever they choose, regardless of the partner’s age.

What if the Underage Person Consents?

What if the Underage Person Lies About Their Age?

The laws on statutory rape in the state of California are quite strict, and this includes cases where the underage person is not truthful about their age and makes the defendant believe they are older than they are. The defendant in this instance may still face charges of statutory rape. For instance, a 24-year-old meets a 15-year-old with a fake ID in a bar. The two ultimately have sex. The defendant can be charged with statutory rape, even if the underage person appeared to be older than 18 and backed up their lies with a fake document to make their story believable.

The first step for any defendant in a sex-based case is to grasp a full understanding of the seriousness of the charges levied against them. As mentioned earlier, the crime of statutory rape can be classified and charged as a misdemeanor if the age difference between the victim and the accused is less than three years. The same is true for so-called “wobbler” charges, where the prosecution has the discretion to charge the defendant with a felony or a misdemeanor. The accused’s criminal history and the facts surrounding the case help determine which way the prosecution leans—felony or misdemeanor—and is not set in stone.

Defendants convicted of felony statutory rape face heightened penalties and may face up to three years in prison. Sentencing is enhanced if the victim was under 16 and the defendant was older than 21 at the time the act was committed; a conviction may come with up to four years in prison.

Although the California Penal Code does not require registration as a sex offender for statutory rape alone if the defendant faces other charges that warrant submission to the National Sex Offender Registry, those requirements must be met. For instance, if the offender is convicted under 261 PC for lewd and lascivious acts with a child, then there is a requirement for ongoing registration as a sex offender.

The state of California takes a hard stance on those who commit statutory rape, so the penalties assessed are quite serious. Those convicted of statutory rape will more than likely face incarceration and fines, and they may be required to register as a sex offender—a stigma that can haunt the convicted person for decades or even life. What’s more, a conviction for statutory rape can affect your ability to rent the home you want, get the job you want, or even get in the school of your choice.

Because statutory rape is such a serious offense that puts your liberty and freedom in jeopardy, you need the best possible criminal defense attorney. Attorney Graham Donath has unique qualifications to defend you against statutory rape charges. Attorney Donath is:

How Your California Criminal Defense Attorney Protects Your Liberty and Freedom

The criminal justice system is designed to protect the safety of the public at large, but it is an imperfect system. Because of these flaws, many defendants who are falsely accused slip through the cracks, mainly due to the fact that they had counsel that didn’t work hard for them or prioritize their cases.

There are definitive procedures that must be followed in a court of law. These standard practices help to ensure that while the criminal justice system is flawed and imperfect, defendants get their fair shake.

As a seasoned and trusted criminal defense attorney, Mr. Donath understands the nuances of criminal court and how to analyze the particular circumstances revolving around every case. This is useful in building the best possible criminal defense strategy to give his clients a fighting chance at minimizing or eliminating the negative possibilities that come with a conviction.

As a client of Mr. Donath’s, you can expect him to: 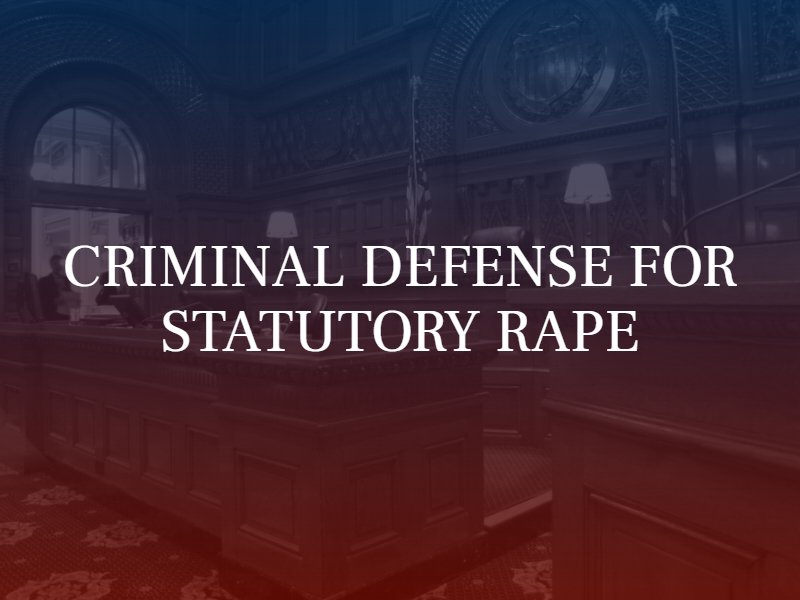 While every situation is different, there are some common defenses to the charge of statutory rape. The most common is that the accused believed that the victim was of majority age when the sex act occurred. Sometimes evidence of this belief can be backed up with messages from the accuser stating that they are 18 or older or in the observance of an ID that was shown to the accused that documented the accuser’s age.

Another defense may be that the crime never occurred at all. If there is no physical evidence and no witnesses saying that it occurred, then the prosecution’s reliance solely on the statements of the accuser may not be sufficient to convince a jury of the accused’s guilt. After all, it is not unheard of for accusers to fabricate accusations for any number of reasons, or even no reason at all.

What is the Statute of Limitations for Statutory Rape in California?

What Should You Do When Charged with Statutory Rape?

Statutory rape is a serious offense, and when faced with the threat of losing your liberty and freedom by being incarcerated, your first inclination is likely to discuss the situation with investigators and protest your guilt. However, it is not advisable that you do so.

You have the constitutional right to remain silent and to have a lawyer present during questioning. If you fail to do so, anything you say—even if it is taken out of context—can be used against you in court. For this reason, stay silent until you have contacted your attorney who can advise you about which questions you can answer. Your attorney can also demand to see the evidence against you, which can help determine the strength of the prosecution’s case.

Being accused of a criminal offense can be scary, but when you are charged with a sexually based crime, it is particularly frightening and can also be embarrassing or humiliating. At the Law Offices of Graham Donath, our team understands what you are going through and works tirelessly to help you fight the charges against you with the goal of preserving your freedom and liberty. Discuss your case with our compassionate, nonjudgmental Riverside criminal defense attorney by reaching out to request a confidential consultation. You can also call us in Riverside at 951-667-5293 or in Orange County at 714-758-5293.