How Do Appeals Work In California?

Posted in Criminal Defense on November 19, 2019

Appeals are one of the most important aspects of our criminal justice system. When a person is initially arrested and charged with a crime, they are innocent until proven otherwise by a court of law. Regardless of how a person is convicted, judges can make bad decisions. Juries have been wrong. Prosecutors can act unethically.

Regardless of what happens when a person is found guilty and sentenced, that is not the end of the line. The appeals process makes it possible for a convicted person to get another chance at being found not guilty. 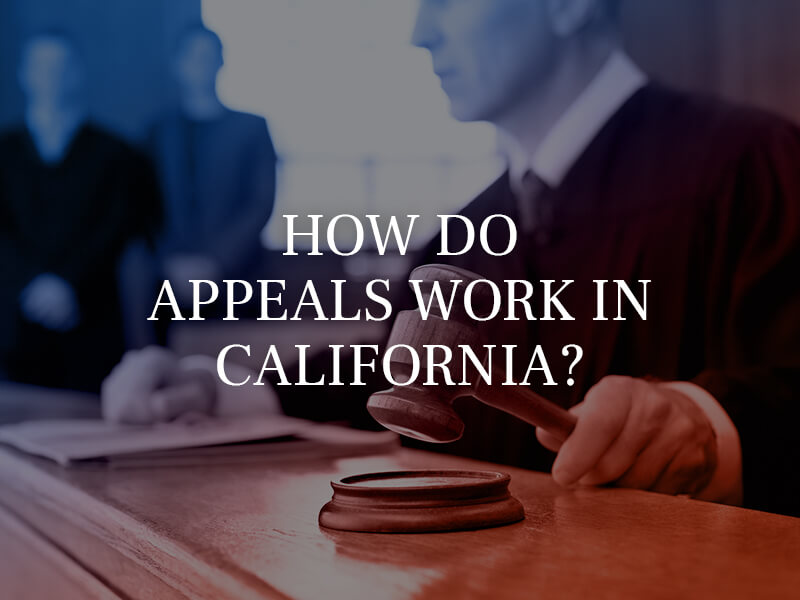 What is a “Notice of Appeal”?

The courts mentioned above will review the lower court’s proceedings and judicial rulings. They are looking to determine if there were any legal errors that substantially affected the rights of any party involved.

The notice of appeal is the first step in this process. You will have the right to appeal after a guilty conviction. This must be done by filing a “Notice of Appeal” within 30 to 60 days following a guilty verdict.

7 Steps After Filing a Notice of Appeal

After filing a “Notice of Appeal,” the steps are as follows:

Bail while on appeal

The appellant has the right to a bail hearing pending their appeal. For felony offenses, this is left up to the discretion of the trial court. If the trial court denies bail, you can appeal the issue to the Court of Appeal.

What about federal appeals?

If you were convicted of a federal crime and pursuing an appeal, you will do so through the US Court of Appeal for the Ninth Circuit and then on to the Supreme Court of the United States. These courts operate on different rules than California appeals courts.

Speak to a local criminal defense attorney if you have questions about appealing a charge or sentence.