Most Dangerous Cities in California 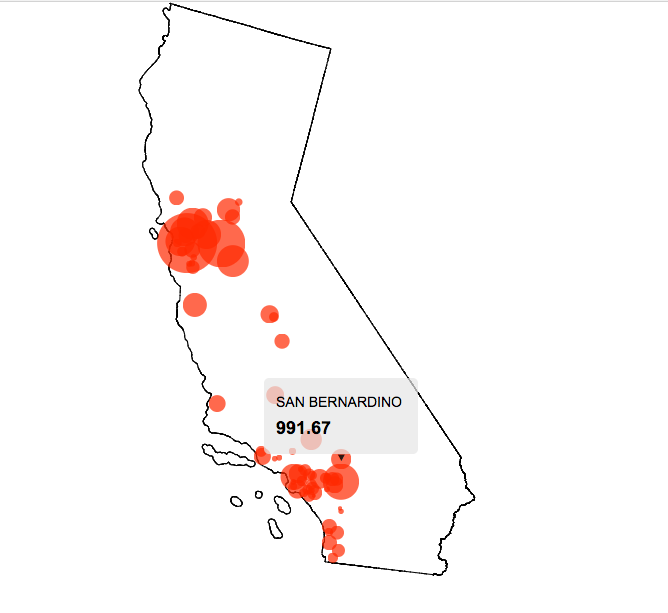 However, using crime statistics alone to determine a city’s level of danger or safety is something that criminologists and the FBI warn against. There are a myriad of other factors that combine to affect crime and public safety in a city. Together- Riverside criminal defense attorney Graham Donath and data visualization firm 1point21 Interactive, we analyzed several of these factors along with the latest crime data from the FBI to find out which cities in California with a population of 100,000 or greater are the most dangerous in the state.

We analyzed data across three key dimensions – Crime, Police Presence, and Community Factors. Within these dimensions, we identified and ranked 14 metrics that influence the safety of a city. The table below displays the results of our study.

*for more information on our ranking formula, see our methodology section

In the state of California, there were a total of 1,105,242 crimes (2,848 crimes per 100,000 people) committed in 2014;. 151,425 of these were what classified as violent crimes. Violent crime, as defined by the FBI, includes instances of murder and non-negligent manslaughter, forcible rape, robbery, and aggravated assault, all of which involve felony charges. Weighed heaviest in our rankings, violent crime had the biggest impact on public safety. By it’s nature, violent crime threatens citizen’s personal safety and even their lives. At the state level, violent crime rates were down compared to 2013 in nearly every category.  This continues a downward (but very positive) trend in the reduction of reported violent crimes over the past 22 years – where it peaked at 345,508 in 1992 . 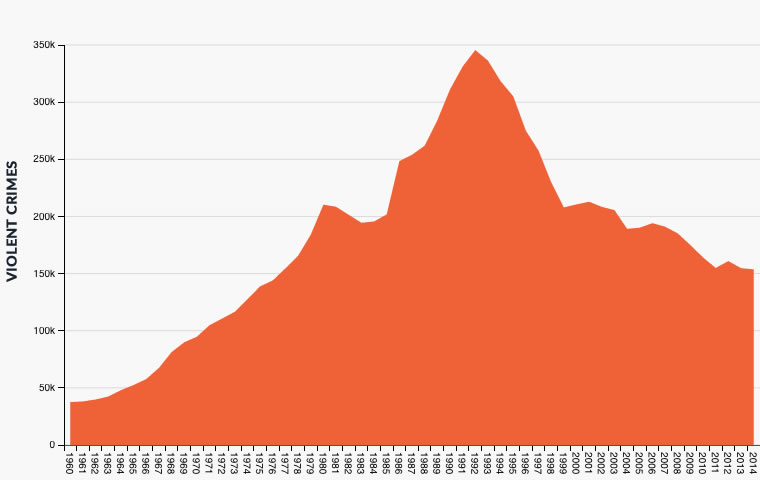 While overall violent crime is decreasing, it remains high and is rising in several cities in the state. Interestingly, violent crime in the state’s biggest city, Los Angeles, has decreased significantly while it has risen sharply in others – Oakland for example.  As previously mentioned, there are many variables that affect crime differently in every city.

Crime Rates in the 10 Largest Cities in California

Looking at the largest cities by population, Oakland stands head and shoulders above the rest, with more than 2X the crime rate of San Francisco and more than 3X of Los Angeles.

20 Most Dangerous Cities in California

The number of law enforcement personnel in the state of California actually increased 0.9 percent in 2014, however it remained 3.0 percent lower overall than in 2009. Since the recession of 2008, funding and staffing in most police departments throughout the state of California has actually gone down, significantly in some cases. This has led to mixed results, particularly in some of the small to mid-size cities. For example, in Anaheim both violent crime and property crime rose after their law enforcement personnel were reduced by close to 8 percent. In Santa Ana though, violent crime plunged by 24 percent after a modest reduction of 4 percent in their police staff.

There were three cities (Bakersfield, Irvine, and Richmond) that actually increased the size of their police departments, but two of them also saw spikes in property crime rates.

Hiring more police officers and boosting department budgets isn’t a panacea for all things crime related, but investment in law enforcement does help.  Of course, how funds and officer man hours areif allocated can have a huge impact and that’s something that varies from city agency to city agency (even precinct to precinct). Focusing law enforcement efforts and budgets on the more serious offenses – such as violent crime – allows police departments to use their resources more effectively, thereby improving public safety.

Community Factors and Their Relationship with Crime

The relationship between poverty rate and crime has been well established. Whether poverty causes crime or crime causes poverty is up for debate (and is debated often and hotly), the relationship between the two is not. The Bureau of Justice Statistics reports that, “persons living in poor households at or below the Federal Poverty Level had more than double the rate of violent victimization and a higher rate of firearm violence (as much as 4X higher) as persons in high-income households.” In California, the story is no different.

In taking a look at our collected data, no city in the bottom ten of crime rate (that is, had the lowest crime) had a poverty rate higher than 12.9 percent. But for cities in the top ten, every one had a poverty rate of 14.5 percent or higher, topping out at 30.6 percent in San Bernardino.

One explanation for high poverty levels in California cities could be the rising cost of living with stagnant wages. California did pass a bill approving $15/hour minimum wage, but this won’t take full effect for a few years. The poverty has actually grown in the state since 2007, and this could be because the increased cost of living is sending people into debt. It’s also encouraging people to leave or discouraging them from moving to the state.

Very recently, California ranked dead last in spending per pupil, which could help explain why many cities have such high percentages of adults without high school diplomas.

It is well established that the volume of crime in an area depends heavily on population size. More people, more crime. However, total population has a much lower effect on crime rates. Researchers and experts have found that population density (in our study: the number of residents per square mile) has a much more measurable impact.  According to a study by the Indiana University Public Policy Institute, the rates of murder, rape, robbery, and aggravated assault are typically higher in areas with high-density residential developments and commercial property, and lower in areas characterized by industry, parks, and schools.

It may sound arbitrary, but it’s true – even the FBI recognizes climate as a factor for determining dangerous areas. There have been several studies done that show a positive relationship between high temperatures and an increase in crime. The International Journal of Humanities and Social Sciences noted that, “It is evident that weather does impact crime. By studying current data and patterns of weather and crime, the outcome should show even more evidence of a correlation between weather and crime than ever before.”

What constitutes high temperature is relative, however.  Some studies put the peak of this effect at 80 degrees, while others have that number in the low 90s. In order to cover all the recognized peaks, we counted up all the days that were 80 degrees or hotter in 2015 for each of the cities included in our research.

We analyzed data across three key dimensions – Crime, Police Presence, and Community Factors. Within these dimensions, we identified and ranked 14 metrics that influence the safety of a city.  Our dataset and rankings are a reflection of the following metrics:

Crime data was sourced from the FBI’s Uniform Crime Reporting program and reflect data for 2014. All data was pulled from the “Offenses known to Law Enforcement” report.

Police department officer headcount and budget data was gathered from a combination of each city’s police department website, published city budgets, and phone calls/emails/tweets to each department.

Demographic information was gathered from the U.S. Bureau of Labor Statistics and Area Vibes.

Population density was calculated using the city populations from the FBI UCR reports and city land area from Wikipedia.

Please confirm deletion. There is no undo!