Penalties For Using a Fake ID

Posted in Criminal Defense on November 13, 2019

TV shows and movies depict teens and young adults obtaining fake IDs for a number of reasons, usually to buy alcohol and cigarettes or to get into clubs and bars. However innocent these interactions may seem on screen, a person caught using a fake ID in California can face a range of consequences. In this state, the law defines a fake ID as any driver’s license or other identification card issued by a government agency that has been:

Penalties for Using a Fake ID

Possessing a fake ID in California is considered a “wobbler” offense, meaning that it can be charged as a misdemeanor or a felony, depending on the facts of the case and the person’s prior criminal record.

Additionally, a person could face a driver’s license suspension for one to three years. 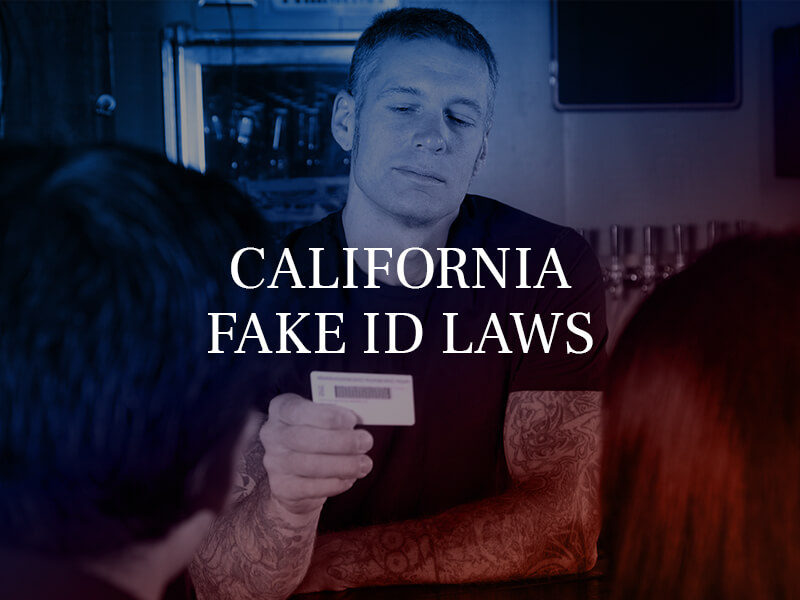 Consequences as a student

Many colleges and universities have their own systems of punishment in place for students convicted of crimes. These punishments can happen regardless of whether or not a person is convicted of a crime in California. Possession of a fake ID or alcohol when under 21 could lead to a college or university:

What if I was caught with alcohol?

It is illegal for a person under 21 years of age to purchase, possess, or consume alcohol in California. If you have been caught and charged with misdemeanor minor in possession of alcohol, you could lose your driver’s license for up to one year. If you were driving and your blood alcohol was .05% or higher you will be charged with DUI. If there was any trace of alcohol in your body, your license will automatically be suspended for one year.

A conviction of a fake ID charge will appear and remain on your permanent record. While this may not seem like a big deal, it can have lasting consequences. Many people are asked if they have previously been convicted of a crime on applications for jobs or to graduate schools. A criminal record can also affect a person’s ability to become a lawyer, doctor, teacher, accountant, or other licensed professional in California.

If you have been charged with possessing a fake ID in California, it is imperative you secure a skilled criminal defense attorney who understands these cases. An attorney will take the time to get to know you and your case. They will: