Driving under the influence (DUI) convictions don’t just happen to alcoholics or reckless drivers. They can happen to anyone on any given night. Many drivers don’t realize they have had too much to drink until police pull them over. Whatever circumstances led to your DUI charge in California, you need a Riverside DUI attorney by your side looking out for your best interests. The law can come down hard on drivers under the influence, even when they don’t necessarily deserve it. The Law Offices of Graham D. Donath, APC are here for those in need of an aggressive DUI lawyer.

It’s impossible to plan your best defense without first speaking to you about your individual DUI case. We want to hear from you during a free, no-obligation criminal defense consultation. Our Riverside drunk driving attorney team is available to listen around the clock. One conversation with us can completely change your outlook for the future after a DUI charge. Contact our experienced Riverside DUI lawyers with experience in San Bernardino, Riverside, Ontario, Corona, Fontana and Rancho Cucamonga at (951) 667-5293 today. At the Law Offices of Graham D.Donath, APC, we look at your case holistically to decide on the best course of action. Depending on your unique circumstances, we can offer advice or reach an agreement with the District Attorney’s Office. Here are, in general, some avenues we try to pursue in lieu of jail time:

What are the Penalties for a DUI in California?

Will I Lose My Driver’s License?

To help increase the safety of California’s roads, lawmakers have increased the penalties for driving under the influence of drugs or alcohol in the state. The police now operate under the rules of “admin per se,” which grants the right to confiscate the driver’s license of anyone suspected of DUI. Regardless of whether the charge has merit, the individual must wait for the length of the suspension before he or she can legally drive again. The new suspension rule comes in addition to expensive costs, community service, DUI school, and possible jail time.

Expenses Related to a DUI Charge

The financial penalties for DUI in California are some of the most severe in the country. Depending on the circumstances of your DUI conviction, you can face costs that amount to $10,000 and more. Insurance costs, court fees, state fines, mandatory substance intervention programs, ignition interlock devices – these are just some of the things a convicted individual will have to pay for out of pocket. A DUI can bankrupt an individual or leave him/her in debt for years.

The right Riverside DUI lawyers can potentially mitigate the charges against you to lessen the penalties or convince the court to drop the charge. In the state of California, the laws governing the operation of a vehicle under the influence can be very complex. A DUI is known as a “priorable” offense, meaning that the punishment varies depending on the number of offenses you accrue in a ten year period. Most DUI’s are classified as misdemeanors, but depending on certain factors, they may be considered felonies. Here are the basic guidelines:

Contact a DUI attorney from our law firm immediately to make sure your legal rights are not being violated. Graham Donath will make sure that your case is resolved with the best results. Call our offices today to speak to our award-winning criminal defense attorney (951) 667-5293

What Factors Can Enhance My Sentence or Fines?

As long as no one is injured, DUIs are considered misdemeanor offenses. However, if a victim suffers harm as a consequence of your operating a vehicle under the influence, California classifies this as a “wobbler,” meaning a prosecuting attorney may charge you with a felony or a misdemeanor at his or her discretion. A felony DUI can result in up to 10 years of jail time, up to $5,000 in fines, and restitution for all injured parties. There are also certain factors that can enhance your sentence or fines. These may vary by county, but in general, you may be subject to higher fines and more jail time if: 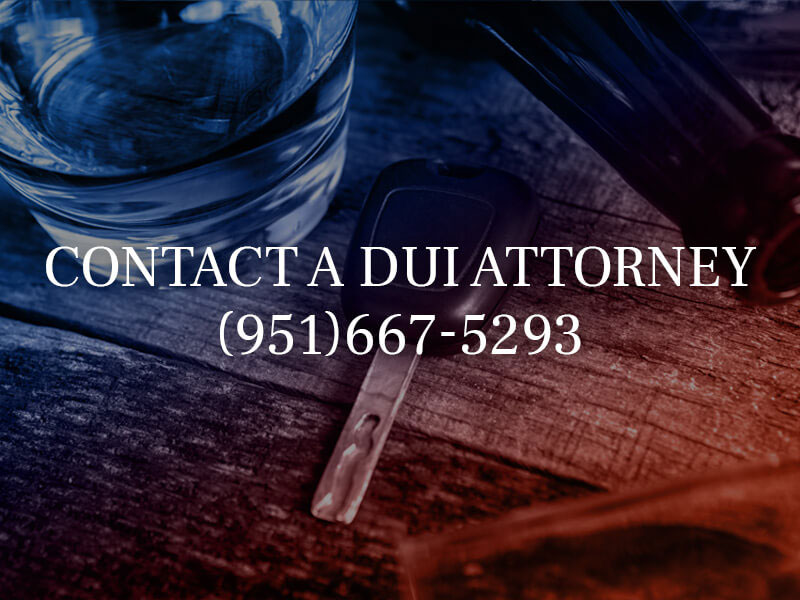 What Should I Do If I Was Arrested on Suspicion of Driving Under the Influence?

If you have been accused of driving under the influence, be cooperative with the investigation. Remember that refusing to submit to chemical testing like a breathalyzer can actually make your sentencing worse. Do not give the officer permission to search your car even if you believe you do not have any illegal drugs. You never know what people will leave in your car and if a police officer discovers any banned substances, you will be charged with drug possession. You should contact a DUI or a drug possession lawyer in Riverside as soon as possible. Do not sign any documentation at the police station unless you have legal representation present. If you submitted to a breathalyzer, the prosecution already has evidence that you were under the influence of alcohol or other substances when you were pulled over. Thus, when defending DUI cases, we focus on reducing your sentence to achieve the most favorable outcome possible instead of getting the charges dropped.

That said, DUI convictions remain relatively stable, highlighting the importance of hiring an effective Riverside and San Bernardino DUI lawyer should you or a loved one be arrested.

What Are Some Defenses For DUI Charges?

Though the number of annual DUI arrests is high, it does not mean every case was handled lawfully or that the drivers were even intoxicated. If you take your case to experienced DUI attorneys in Riverside County, there are a few potential defenses they will likely explore. These legal professionals know how local and state police document a traffic stop, and if this leads to an arrest, your legal team will ensure they do not factor specious evidence into the final ruling.

What makes our law firm so successful at DUI defense is our tailed approach to each case. We’ve represented enough clients to know that no two driving under the influence cases are alike. They require strict attention to detail and innovative defense strategies for the most successful outcomes. There are a variety of potential defenses we might use in a DUI case depending on the circumstances.

For instance, there are numerous physical impairments that affect a person’s ability to walk in a straight line. In all likelihood, a person’s nerves are completely shot during a traffic stop, especially when asked to get out of the car and perform complex maneuvers. Depending on how tired a person is or even how cold it is outside, this test may be incorrectly and unfairly submitted.

What if I Get Charged With a DUI But I’m Underage?

Getting DUI charges under the age of 21 comes with different consequences and penalties than an of-age DUI conviction in California. Since 1994, California has operated under a Zero Tolerance Law against underage drinking and driving. This law created new penalties for underage DUI drivers. Learn the potential consequences and defense options for underage DUIs under the Zero Tolerance statute. Don’t hesitate to call Graham Donath Law Offices, APC if you are under 21 and were charged with driving under the influence, we offer a free case evaluation for our clients.

What is the Zero Tolerance Law in California?

Under the Zero Tolerance Law, any driver under this age convicted of driving under the influence of alcohol will receive an underage DUI. Under the Zero Tolerance Law, any person under the age of 21 with any amount of alcohol in his/her system (a blood alcohol concentration of 0.01% or higher) will receive a DUI charge. It does not matter if the driver is exhibiting signs of being intoxicated or if he/she is even intoxicated. If the officer suspects the minor has been drinking and a test comes up with any trace of alcohol, the driver will receive a DUI charge. This charge can have major implications depending on the circumstances.

The legal drinking age in California is 21. The only time an underage person will not receive a penalty for drinking is if he/she is calling to report a medical emergency concerning another underage drinker. California law has this exception in place to encourage minors to call the police in emergencies without fear of retaliation. However, no such exception exists for underage drinkers who drive while intoxicated.

Penalties for Minors Driving Under the Influence

The penalties for underage DUI are strict to discourage people under the legal drinking age from getting behind the wheel after consuming alcohol. The penalties increase with a second or subsequent underage DUI conviction. Penalties in California are as follows:

California’s implied consent law states that you consent to drug and alcohol tests if an officer has reason to believe you’re driving under the influence. If you refuse a blood or other chemical test, you face penalties such as fines, loss of license, and even jail time. Second or subsequent refusals can result in more severe penalties. Refusing the test does not mean you automatically escape an underage DUI. In fact, the officer could use your refusal against you as proof that you knew you would fail the test.

Receiving a DUI while under the age of 21 can have lasting ramifications. Your car insurance premium will likely increase, or your company could drop your coverage altogether. You may be required to attend alcohol or safe driving classes. You will have DUI on your permanent record. You may also face additional penalties for other charges, such as possession of fake ID, minor in possession, or moving violations such as reckless driving. To increase your chances of reducing charges and penalties, you need strong, aggressive legal representation in your underage DUI defense. The defense attorneys at Graham Donath Law Offices, APC are experienced in representing people charged with underage DUI in California. We know the most appropriate strategies for defense, if applicable. We also know how the criminal court system operates. Our attorneys have a repertoire with local circuit judges from our years in the field. We can help you fight an underage DUI or at least reduce your penalties. Contact us to speak with an attorney about underage DUI defense.

Schedule a Free Consultation With Our DUI Attorneys

If you are facing a DUI charge, you need the help of a local DUI attorney in Southern California that will work with the prosecution to seek alternative solutions to jail time. Our Riverside criminal defense lawyer, Graham D. Donath, will work aggressively to protect your rights and reach the best solution we can. Contact our office today for a free consultation. If interested in learning about DUI with drugs and California’s push to legalize marijuana, check out my expert round-up with a retired LA Chief of police and a Superior Court Judge.

“I strongly recommend Mr. Donath as a criminal defense attorney to handle complex cases. He kept me informed and spent as much time with me as it was needed for the case. He was thorough in answering my questions.”-Riva Read more client reviews here.