Elder abuse is a serious crime. If you’ve recently been charged with abuse of an elderly individual, you may be worried about your future, especially if you feel the allegations are untrue. Elderly abuse is a complex and multi-faceted crime – Riverside elder abuse lawyer, Graham Donath can help you understand the charges and possible defenses may ease your confusion and help you prepare for what comes next.

Why Choose the Law Offices of Graham Donath?

When you need an attorney to defend against allegations of elderly abuse, you need to be sure you seek help from someone with the knowledge and experience necessary to handle every aspect of your case. Graham Donath is ready to get to work on your case. You can be sure that Graham Donath understands the complexities of elderly and nursing home abuse cases.

You want an attorney who is trusted by their clients. When you look through the client testimonials for Graham Donath, you will see that he will tenaciously represent you in all aspects of your case. One client says, “All in all, I honestly could not not be happier with the quality of work I received from Graham during this entire ordeal. I feel the price paid was extremely reasonable given the VERY high quality of my representation.”

Do You Need an Attorney?

An experienced attorney in elder law and nursing home abuse is absolutely necessary for these cases. If you are charged with or accused of abusing and elderly individual, the attorneys from the Law Offices of Graham Donath will examine all of the evidence against you. They will then conduct their own investigation into what happened. This includes:

It is helpful to look at some of the cases won by Graham Donath. His tireless work on behalf of clients is seen in this sampling of cases:

Penal Code 368 classifies elder abuse as any kind of harm inflicted on someone aged 65 or older. Abuse is much more complex than just hitting someone – in fact, elder abuse can occur in any of the following contexts:

Elder abuse can be a misdemeanor or a felony, which makes it a “wobbler crime” – it can wobble between the two depending on the situation. The prosecution may label it as either, depending on the nature and gravity of the offense, as well as a defendant’s prior criminal history.

Misdemeanor offenses are punishable by fines and/or up to one year in jail. Felony offenses may result in a punishment of up to 4 years in a state prison. 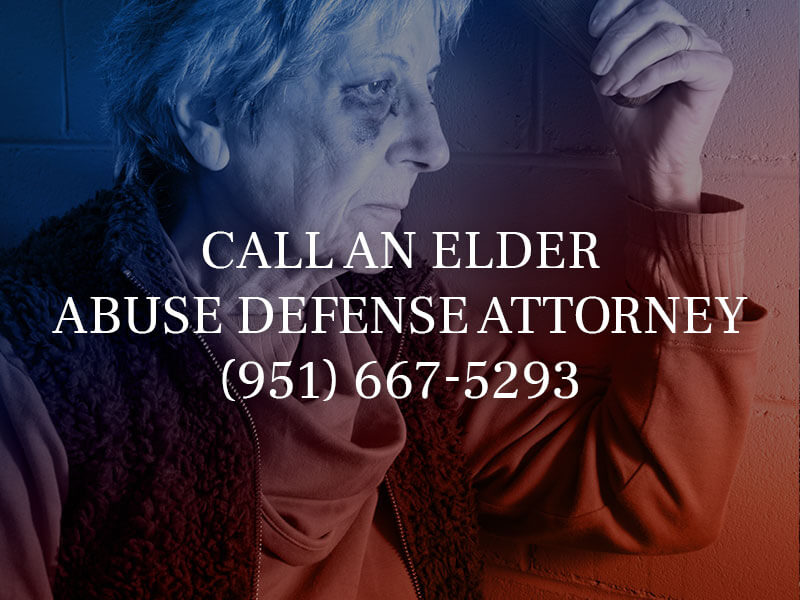 There are various crimes associated with elder abuse in California. Many of these crimes can be classified as either misdemeanor or felony offenses (known as wobblers). These charges and their associated penalties can include:

Many of these crimes will also require a person to be on supervised release after leaving jail or prison (probation). Crimes of rape, sexual penetration, and lewd and lascivious acts will likely require a person to register as a sex offender upon conviction.

I Have Been Charged With Elder Abuse. Now What?

If you have been charged with elder abuse, elder neglect or any related elder crimes, exercise your right to remain silent. The prosecution or arresting officers may try to twist any words you say to use them against you in court. Never speak about the case unless you are in the presence of a Riverside assault defense attorney, and never sign any written statements without his or her blessing.

You likely have a complex relationship with the alleged victim if you have been charged with violations of elderly abuse, so facing these sorts of charges can be an emotional experience. It is impossible for us to tell you exactly how we would defend your case because each one has a unique set of circumstances. However, there are some general tactics our abuse lawyers in Riverside and the Inland Empire, employ in an effort to get your charges reduced or dismissed:

If all three of these elements do not exist, you cannot be found guilty of abusing the elderly. If, for example, an injury was the result of an accident, the act of abuse did not occur.

Nonetheless, an experienced attorney can help you evaluate and build up a strong qualified case.

What Do I Do After Being Charged With Elder Abuse?

If you’ve been charged with elder abuse, the most important thing you can do is to remain silent. Do not sign any statements or answer any questions until your elder abuse attorney or nursing home abuse attorneys arrive. Many people speak out because they feel they’ve done nothing wrong, only to have the police or a prosecutor interpret what they’ve said in a way they didn’t intend or expect.

If you are facing elder abuse charges, the most important thing you can do is to hire the right legal representation. Prosecuting attorneys pursue these types of cases very doggedly. You need a Riverside elder abuse lawyer willing to fight back and protect your rights. At the Law Offices of Graham D. Donath, APC we will work to defend you with our years of expertise and knowledge. For a free initial consultation, contact our office today for more information.