No matter the circumstances of your particular crime, we will work hard to reach the best outcome possible, whether that is a reduced charge or an outright dismissal. Contact us today for expert legal counsel from an award-winning Riverside robbery lawyer. All initial consultations are free, whether you end up hiring the Law Offices of Graham D. Donath, APC or not. 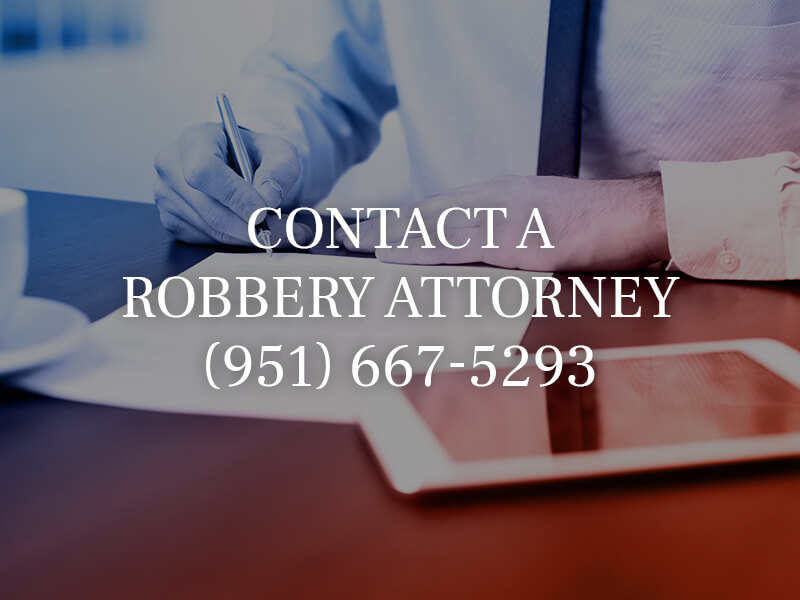 When it comes to charges of robbery, you must ensure you have the best legal representation possible because a conviction could affect the rest of your life. When you turn to Graham Donath, you are turning to a seasoned and aggressive Riverside robbery attorney who understands the complexity of these cases.

Graham Donath is trusted by his clients. Just a quick sampling of client testimonials paints a picture of the type of representation you will receive:

“I have been fortunate enough to employ Mr. Donath for his services. The service was unparalleled to any other I have experienced. He took care of everything…”

“Graham went above and beyond to get my case settled and get me the best result possible for my situation. I will continue to use him if needed for any future legal matters.”

Graham Donath works tirelessly for his clients, and this is seen in the number of successful cases he has completed. Below is a sampling of some of the cases he has brought to a successful conclusion:

Each of these cases, along with countless others handled by Graham Donath, serve to show that he is the right person to handle your Riverside robbery charges. Mr. Donath will bring the full force of his knowledge and experience to your side.

California Law: What Is Robbery?

Many states, including California, define robbery as an act involving the theft of property using actual force or the threat of physical force. Robbery differs from burglary in that it involves a victim who experiences actual harm or reasonable fear for his or her safety. When a defendant uses a gun or other deadly weapon during a robbery, the crime may fulfill conditions for aggravated or armed robbery, which carries harsher penalties.

Here’s an example of a possible robbery under California law: Jim approaches Sue from behind and holds a fist behind her back, demanding her purse. Sue fears Jim might be holding a gun and surrenders her property. Were Jim’s fist actually a gun, he would face charges of aggravated robbery.

Seek advice from a weapons charges lawyer in Riverside to talk about your legal options if you are convicted of an armed robbery.

At its core, robbery is theft or larceny under the threat or presence of violence. This makes robbery a violent crime, and subject to harsher penalties under California law. The state views robbery as a felony, punishable by both fines and jail time. California Penal Code Section 213 outlines the punishments for robbery by type:

The element of force is core to a robbery charge. As a result, one of the essential questions for the prosecution is the timing of violence. For example, if violence only occurs when a defendant tries to escape the scene after committing burglary, he or she may face charges of resisting arrest and larceny (theft), but not robbery.

Further, the degree of violence required to elevate theft to robbery can be slight, depending on the circumstances. Even the threat of physical violence or intimidation can lead to robbery charges over theft charges – for example, if a large and intimidating assailant robs an elderly person. On the other hand, all robberies require some element of violence. For example, the elderly person must resist giving up the purse before theft turns into a robbery. If the defendant’s action required no force to remove the purse from the person, then a jury may find that theft occurred, not robbery.

This distinction can be very important in mounting an effective criminal defense for robbery. An experienced Riverside defense lawyer may be able to argue, in some cases, that the amount of necessary force did not rise beyond what was required to take the property in question.

A criminal defense attorney’s job is to establish reasonable doubt in a jury. In order to face a conviction for robbery, the prosecution must convince a jury beyond a reasonable doubt that the robbery occurred under threat of violence. An experienced criminal defense attorney can establish reasonable doubt in a jury in a variety of ways, but one of these is by showing a jury that it’s possible that the threat of violence or use of violence was not strong enough to justify a robbery charge. If even one juror believes that there might not be enough violence to assign guilt, then a conviction cannot occur.

On the other hand, establishing reasonable doubt in a jury requires skill and experience. Some defendants rely on their right to a free public defense, which often proves to be a mistake. These attorneys become overworked and have large caseloads, which makes them unable to dedicate proper attention to each defendant’s case.

What to Do When You Are Charged With Robbery in Riverside

If you are arrested on robbery charges, exercise your right to remain silent. When you are taken into custody, you should be polite and courteous to the arresting officers, but do not volunteer any information about the alleged crime. Police officers are trained to get you to confess, so you do not want to accidentally give away any information that could incriminate you. You should ask for legal representation as soon as possible. Do not answer any questions or sign any documents without a lawyer present.

Once the initial arrest is over, your legal team can go to work building your defense. Like any criminal charge, the defenses we craft hinge on our clients’ histories and the circumstances of their incidents. However, we also know that it is important to keep our clients informed, so here are some tactics we may be able to use to get your sentence dismissed or reduced:

Committing robbery can go beyond the classic “stick up” scenario. In fact, you may commit an offense in a way you did not consider possible. Since the California laws regarding robbery are so intricate, it’s wise to meet with a Riverside robbery lawyer to go over the details of your unique charges.

There are several ways you can be charged with robbery:

In the state of California, robbery is always classified as a felony. However, the degree of the felony, as well as the punishment, depends on the individual circumstances surrounding the crime. Again, for detailed information surrounding your charges, schedule your free consultation with our award-winning Riverside robbery attorney.

To be charged with a first-degree felony, one of the following elements must be present:

First degree felonies are the most serious offenses and can result in a jail sentence of 3-6 years and up to $10,000 in fines.

Burglaries under all other circumstances are classified as second-degree felonies and should be taken seriously. These crimes tend to be punished less harshly, but  Riverside burglary attorneys say it can still carry a jail sentence of 2-5 years and up to $10,000 in fines. In some cases, judges will consider felony probation.

If you are accused of a robbery or burglary, speak to our Riverside robbery lawyers immediately to prepare a skilled defense.