Holidays With the Most DUI Arrests

Posted in Criminal Defense,DUI on November 14, 2019

Holidays are a great opportunity to enjoy spending time with family and friends. Many people enjoy having alcoholic beverages around holidays, and when they do, they need to find someone else to drive. Unfortunately, the holidays are typically marred by an increase in DUI arrests. With the winter holidays right around the corner, we wanted to look at which annual holidays and holiday weekends result in the most DUI arrests. 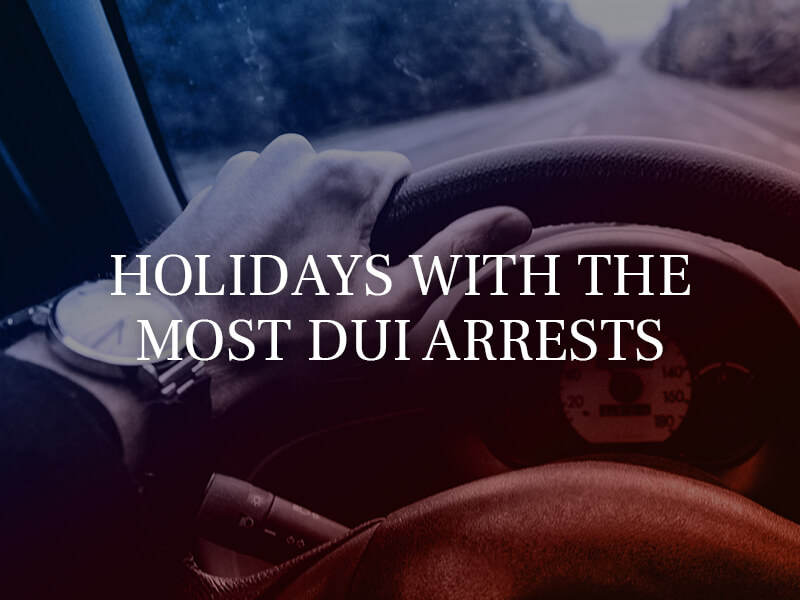 Top 5 Holidays With The Most DUI Arrests

Checkpoints are legal methods that law enforcement officials use to look for various driving infractions, including DUI. According to the California Office of Traffic Safety (OTS), there were 1,148 total DUI checkpoints conducted across the state during the latest reporting year with the assistance of OTS funding. More than 1,200,000 vehicles went through these checkpoints, and nearly 10,000 field sobriety tests were administered. 2,294 alcohol-related arrests were made, and 455 drug-related impairment arrests were made at these checkpoints.

Aside from DUI checkpoints, the OTS also helps local law enforcement officials conduct “DUI saturation patrols.” Out of these saturation patrols, over 5,000 people were arrests for the impairment of alcohol or drugs.

DUI checkpoints are always announced ahead of time and have been deemed to be Constitutional by the US Supreme Court.

If you or someone you care about has been arrested and charged with DUI, you contact a local DUI attorney in Riverside. A DUI conviction can have long-lasting impacts on your life, including jail time, fines, higher insurance premiums, license suspension, a ruined reputation, and more.

The Graham Donath Law Offices, APC are ready to step in and take your case. You can count on Graham Donath to get to the bottom of your case and work to get the charges against you reduced or dismissed altogether. When you need a Riverside or Orange County DUI attorney, contact Graham Donath by clicking here or by calling 915-667-5293 (Riverside) or 714-758-5293 (Orange County).