The Difference Between Robbery & Burglary

In many cases, people will use the words “burglary” and “robbery” interchangeably when in fact, these two words indicate two separate types of crimes. Burglary involves a person entering a building to commit a crime inside while robbery is generally meant to indicate the taking of something of value directly from another person by the use of force. Both burglary and robbery are crimes income with significant penalties. 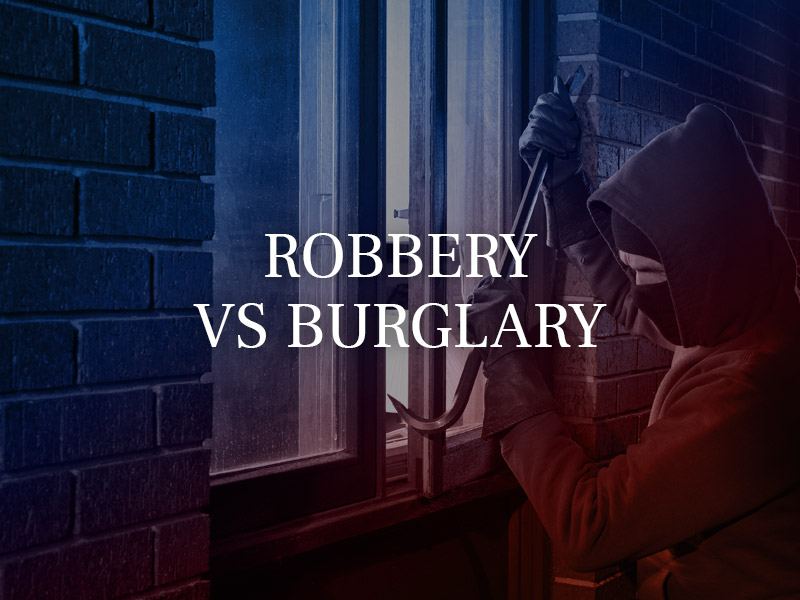 Penal Code 211 Defines robbery as the taking of personal property from someone else’s person or immediate presence, against the victim’s will, and through the use of force.

Robbery in California is considered first-degree if it is a robbery:

First-degree robbery charges can lead to a state prison sentence between 3 and 9 years. Those found guilty could also face a fine of up to $10,000.

Penal Code 459 defines the crime of “burglary” in California. Burglary becomes a crime when someone enters a residential or commercial building with the intent to commit a felony or theft on the inside. A person can commit burglary simply by entering a structure with the intent to commit a crime. If the intended theft or felony is not actually completed, a person can still be charged with burglary.

First-degree burglary in California is always a felony charge. A person can face up to 2, 4, or 6 years in state prison if convicted. A person could also face a fine of up to $10,000.

Second-degree burglary In California is considered a “wobbler” offense. This could be charged as a misdemeanor with up to one year in jail or as a felony with a jail sentence of 16 months, two years, or three years, as well as a fine ranging from $1,000 to $10,000, depending on whether the charge was a misdemeanor of a felony.

A person often faces both charges

As you can see by the definition of these charges, a person may often face both charges of robbery and burglary. If a person allegedly enters someone else’s house and deprives them of their property at gunpoint, they will likely face both burglary and robbery charges.

As was mentioned above, a person does not have to have actually stolen anything to be convicted of burglary. However, for a person to be found guilty of robbery, it must be proven that the defendant took or tried to take something from the victim.

A person facing these charges certainly needs to secure assistance from a skilled Rancho Cucamonga criminal defense lawyer who can navigate the complicated legal process.