Can You Still Be Arrested With BAC Below .08?

Most people understand that there are fairly stringent laws concerning alcohol, particularly when it comes to driving. Nobody is allowed to drive with a blood alcohol content (BAC) level of .08% or above. At this level, a person is considered to be intoxicated, though the amount of drinks it takes for a person to reach this level varies from person to person. However, there are times when a person can be arrested for DUI when their BAC is below .08%.

What If the driver is under 21?

California has a Zero Tolerance Law for those who drink under the age of 21. This means that they cannot have any detectable amount of alcohol in their body while driving. If someone under the age of 21 is pulled over and determined to have a BAC of .01%, that is enough to trigger an arrest.

Other factors to consider

Most states have set the legal BAC limit for driving at .08%. Some states differ, but .08% is the norm. However, it is a common misconception that there is no way to get arrested for DUI with a BAC of less than .08%.

Under California Law (VC Section 23152(a)), a person can be arrested and charged with DUI if the police and prosecution can prove that their ability to drive safely was impaired.

Another factor to consider is that a person can be arrested for driving under the influence of any substance that alters their ability to drive. This can include illicit drugs as well as prescription and over-the-counter medications. Something as seemingly harmless as allergy medication can impair a person’s ability to drive.

An adult could have a BAC of .03%, but any substance they have taken other than alcohol could further impair their driving ability and result in a DUI. 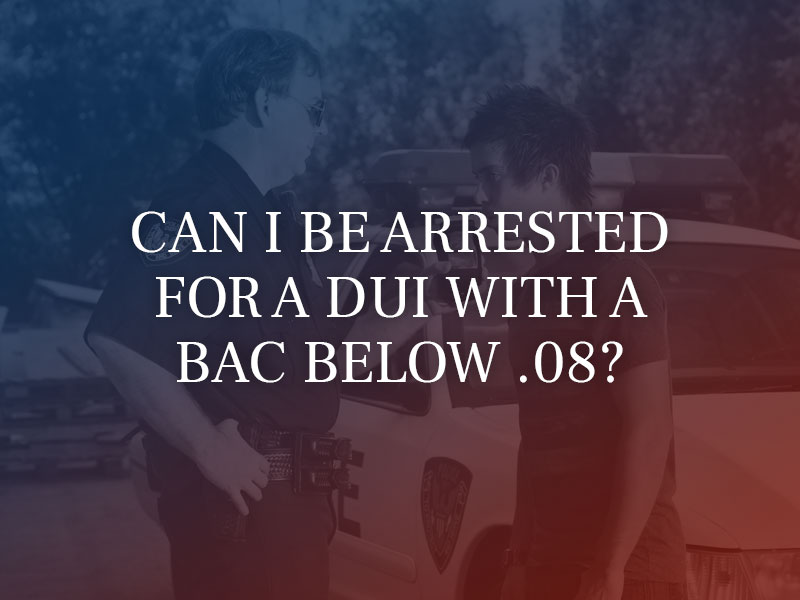 Can police prove impairment without a BAC of .08% or above?

If you or someone you love has been charged with DUI, you need to seek assistance from an attorney. Even if your blood alcohol level was below .08%, that does not mean the police and prosecutors cannot seek DUI charges. They can, and you could end up with a guilty conviction that stays on your permanent record. Your Riverside DUI defense attorney will work to gather all of the evidence being used against you and develop a defense strategy in your favor. The ultimate goal is to get your charges reduced or dismissed altogether. Guilty convictions for DUI could lead to serious consequences, including a mark on your criminal record, jail time, fines, a license suspension, and higher insurance costs. Do not take your chances with any DUI arrest. You can contact the Law Offices of Graham D. Donath, APC for a consultation of your case by clicking here or calling (951) 667-5293.